Velvet Antler has been referred to as “the most important nutrient of the 21st century!”

“Velvet Antler can be applied to most of the diseases but I especially use it for sciatic neuritis, impotence, shoulder pain, neck stiffness and the after effects of paralysis. Dr. Yoon, prescribes it for kidney disorders, anemia, and for normalizing blood pressure. It is also used to treat impotence and other male sexual problems and menstrual problems, infertility and menopause in women.”

“Asians take velvet as a tonic to maintain good health, cure sickness and strengthen a weakened body.” He added that velvet is also used to increase the blood, remedy kidney deficiency and gastro-intestinal disorders, to improve low blood pressure and eliminate anemia. It is also used to promote rapid healing by aiding the regeneration of damaged tissue, to treat menstrual disorders and menopause in women, to relieve lumbago and improve weak bones and sinews.

Dr. Koltun also mentioned that one of the most significant attributes of velvet antler is the discovery of Dr. Ivan Kinia, who co-authored several studies from the Siberian institution known as Blagoveshemska in 1989. It was shown that among the main bioactive substances in deer antler are the anti-inflammatory prostaglandins, which are especially effective in people who suffer from arthritis.

Dr. Morrison conducted a six-year study demonstrating that Chondroitin Sulfate A which is found in velvet antler reduces the incident of fatal heart attacks and strokes by more than 400%!

Excel Rx Plus is “THE spray for those who always want to stay way ahead of the game!”

Could deer antlers hold the clues to cure cancer? 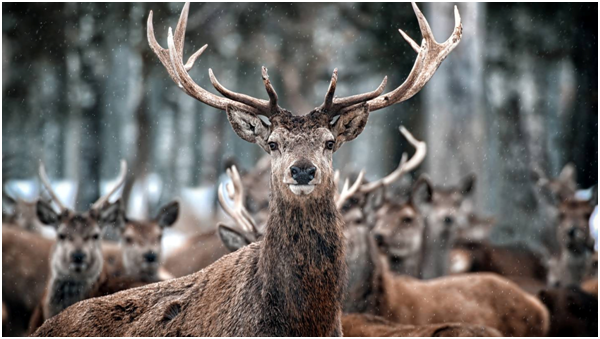 Cancer-related genes allow deer to grow a new pair of antlers every year but the animals rarely die of the disease thanks to tumor-suppressing genes that keep the aggressive cells in check, an international study led by Chinese researchers has found.

The researchers also found that while some deer might have tumors all over their body, the growths do almost no harm and disappear with time.

The findings, published in the latest issue of the journal Science, could open up new directions in organ regeneration and cancer treatments, according to the researchers.

Wang Wen, the study’s lead author and professor of biology at Northwestern Polytechnical University in Xian, Shaanxi province, said deer were unique for their ability to regrow antlers – complex organs of bones, blood vessels, nerves, muscle, skin and even fur, known as velvet.

“Deer can completely regenerate an organ. No other mammal has that ability,” Wang said.

Antlers grow rapidly – up to 2.5cm (one inch) a day in the case of red deer – and Wang’s team identified nine genes involved in antler cell growth.

All of those genes were oncogenes, or related to cancer, with some accelerating cell proliferation and differentiation; some are responsible for tumor formation in bones and skin, and some prolonging the cancer cells’ life.

The team also identified another 19 genes that act as tumor suppressors, stopping the antler growth going out of control, according to the Science paper.

Breast cancer breakthrough uses molecular data to predict whether tumors will come back. The genes work together to allow the antler cells to thrive without developing into cancer in other parts of the body.

The researchers said the genes might have been the product of random mutation, probably as early as 20 million years ago, giving rise to a group of stags with bigger antlers, according to the researchers.

The larger appendages might have been more attractive to female deer, despite the risk of cancerous tumors. Over time, natural selection favored deer with stronger resistance to the tumors, according to the researchers.

They said the animals’ ability to grow large amounts of “innervated bone with low tumor and infection incidence” could be useful in treating skeletal defects, regenerating nerves, and possibly even limiting cancer growth.

The study is part of the Ruminant Genome Project, a research program led by Chinese scientists to sequence and analyze the genes of all grazing mammal families.

Other discoveries from the project include a big decline in the ruminant population between 100,000 and 50,000 years ago, which coincides with the expansion of the human population as people left Africa. The decline was recorded in numerous genetic code variants and provided new evidence on the impact of human activities on the global ecological system.

The researchers also found the genes that allow reindeer to thrive in Arctic environments.

These genes not only allow the animal to adapt to extreme cold but help maintain body functions in the absence of sunlight.

These discoveries will lead to new drugs or treatments for many human diseases such as insomnia and bone loss, according to the scientists.

For consumers of healthcare products, sales of deer antler velvet products are alive and well in the marketplace. Supplements in the form of pills, capsules, liquids and sprays are available, and touted as improving general wellness and athletic performance.

In relation to prostate cancer (PCa), a collaborative research team from Korea and China published a 2015 laboratory study using deer velvet antler (their terminology, abbreviated DVA) applied to PCa cells in lab preparations[i]. DVA, especially one extract formulated with the highest proportion of organic matter (T-DVA), is rich in antioxidants which are known to have anti-cancer properties. Their lab experiment demonstrated that T-DVA suppressed the protein expression of PSA and also had to the potential to inhibit metastatic processes of PCa cells.

As cited in the original blog below, four years later the same team[ii] published their experiment with lab animals that had been implanted with PCa tumor cells. When sacrificed after two weeks of exposure to antler extract, it was found that both PSA and blood testosterone levels had dropped, and tumor growth had been inhibited by 65.8%. Genomic analysis of the specimens revealed anti-cancer activity through the downregulation of specific genes that can promote tumor activity.

A more recent (2021) Spanish lab study likewise explains that deer antlers have “…evolved a high rate of growth due to the expression of proto-oncogenes and that they have also evolved to express several tumor suppressor genes to control the risk of cancer.”[iii] They tested antler extract on normal cells, where it appeared to be non-toxic. Then, when tested on glioblastoma (brain cancer) cells, it was discovered that exposure inhibited several tumor proliferation processes, suggesting that someday antler velvet extract may play a role in treating this deadly cancer.